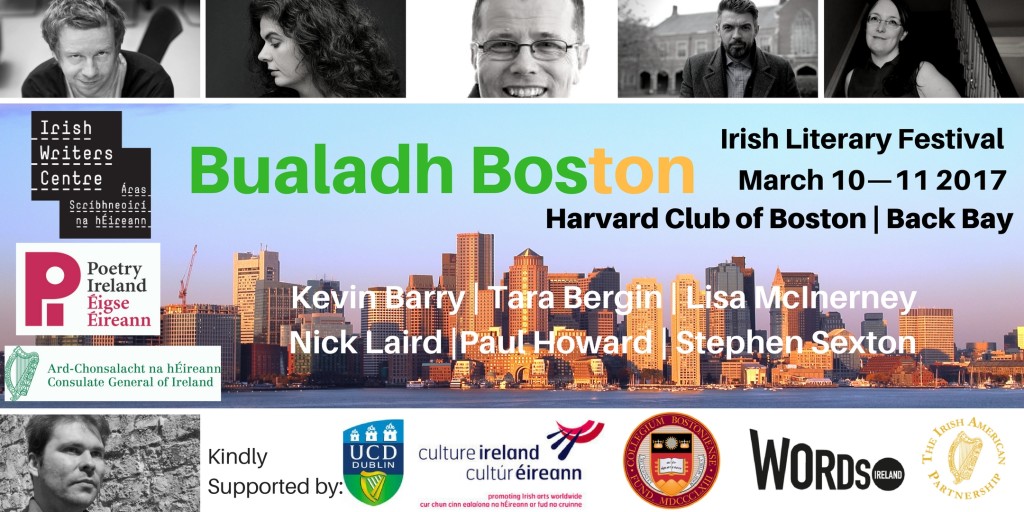 In the Irish language, the phrase Bualadh Bos is used to express applause. On March 10th and 11th, the Irish Writers Centre, Poetry Ireland and the Consulate General of Ireland are delighted to present some of Ireland’s finest contemporary writers in historic Boston, the capital of Irish America, in conversation with local champions of the Boston arts world for novel insights into Irish literature today.

For the first night of Bualadh Boston, Consul General Fionnuala Quinlan will be in conversation with Kevin Barry and Lisa McInerney, the shining lights in contemporary Irish literature. Their work is exciting, funny, accessible and clever, much like themselves. Both are award-winning writers of literature’s most coveted prizes and we get the feeling they’ve only just begun.

In this poetry showcase, three of Ireland’s most exciting contemporary poets, Tara Bergin, Nick Laird and Stephen Sexton, will read their work and share their experiences as Irish poets working at home and abroad.

Join Paul Howard of million-selling Ross O’Carroll-Kelly fame, as he chats to Boston Globe journalist Kevin Cullen about rugby, life, journalism, fake news and the world we live in today.

Bualadh Boston is brought to you by the Irish Writers Centre, Poetry Ireland and the Consulate General of Ireland.