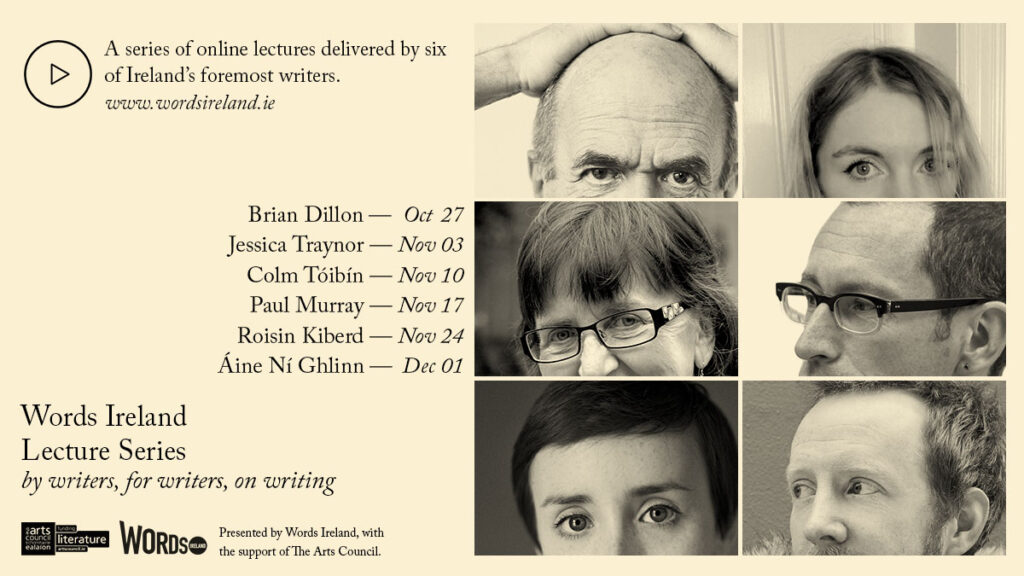 Welcome to the Words Ireland Lecture Series – by writers, for writers, on writing.

Words Ireland has commissioned six of Ireland’s foremost creative writers to deliver a lecture on the craft, practice, or process of writing. The Series began on October 27th with Brian Dillon. A new lecture will be launched at 6pm every Tuesday until December 1st.

All lectures will be available to view online until 31 December, below or at the Words Ireland YouTube channel.

1. Brian Dillon: Sixteen Stabs at the Beast of Style

Welcome to the opening instalment of the Words Ireland Lecture Series.

Following on from his acclaimed Essayism, and coinciding with his new book Suppose A Sentence, Words Ireland has commissioned a short lecture from Brian Dillon on one of his favourite topics to return to: style.

Jessica Traynor continues the series with Poetry & Innovation. Discover the techniques breaking new ground in the US and UK, and learn how you can apply them to your own work.

Jessica Traynor was runner up in the 2015 Troubadour International Poetry Prize and was nominated for the 2015 Strong/Shine Award for first collections. She was recipient of the Ireland Chair of Poetry Bursary in 2014, was named Hennessy New Irish Writer of the Year in 2013 and won the 2011 Listowel Poetry Prize. Her work has been translated into Czech, Hungarian, Irish, Italian, Polish, Portuguese and Spanish.

Colm Tóibín discusses the craft of James Joyce – and the idea of craft itself.  Is craft a concept more suited to poetry? Could strict ideas around craft actually be a hindrance to novelists and short story writers? Could they inhibit creativity? Colm Tóibín was born in Ireland in 1955. He is the author of nine novels including the Booker-shortlisted The Blackwater Lightship and The Master. His short stories, drama, and criticism have won several awards and wide acclaim.

4. Paul Murray: Writer at the Movies

“As for structural issues, I didn’t know what they meant. I thought structure was just a fancy way of saying plot.” Paul Murray is author of three acclaimed and award-winning novels – An Evening of Long Goodbyes, Skippy Dies, and The Mark and the Void – but more recently he wrote the script for the film Metal Heart. Paul talks about what it was like going from novel writing to script writing. He outlines the differences in the processes, structure, and what he learned from the experience.

5. Roisin Kiberd: Writing in the Age of the Internet

An insightful and ideas-laden lecture on writing in the age of the internet, and how embracing internet tropes and online folklore can enrich our writing. Roisin Kiberd discusses ideas from some of the most relevant and prescient books about online culture, and offers essential first principles on writing about the internet – about how we can best observe ‘the collision of the human with the system’.

Áine is interested in the concept of invisibility in literature from the cap of Perseus to Harry Potter’s invisibility cloak. In this, her inaugural Laureate lecture, she explores the creative freedom and limitations anonymity brings. Her stated ambition as Laureate na nÓg is to lift the cloak of invisibility from Irish language writing for children. But what does that mean for her as writer? And why it is important for her creative process to have parity of esteem with artists who write in English?

Áine Ni Ghlinn is Ireland’s 6th Laureate na nÓg (Children’s Literature Laureate). She is the first artist working solely in the Irish language to be awarded the honour. Laureate na nÓg is an initiative of the Arts Council, managed on the Council’s behalf by Children’s Books Ireland, with the support of the Arts Council of Northern Ireland, the Department of Children and Youth Affairs and Poetry Ireland.