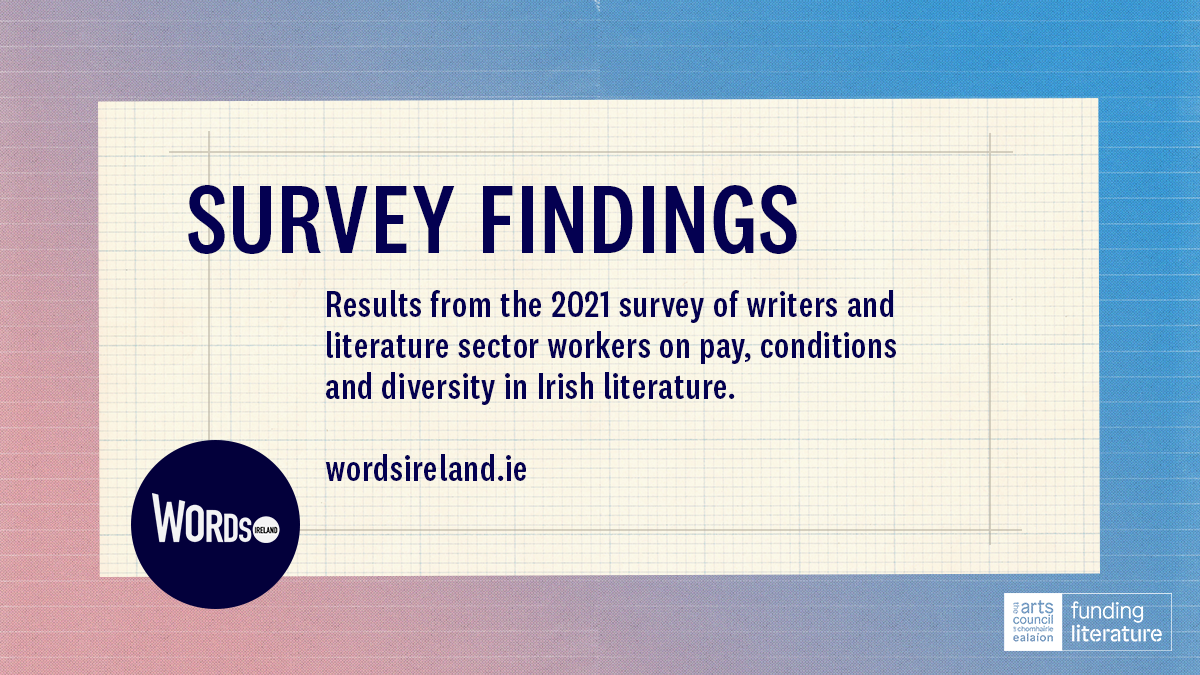 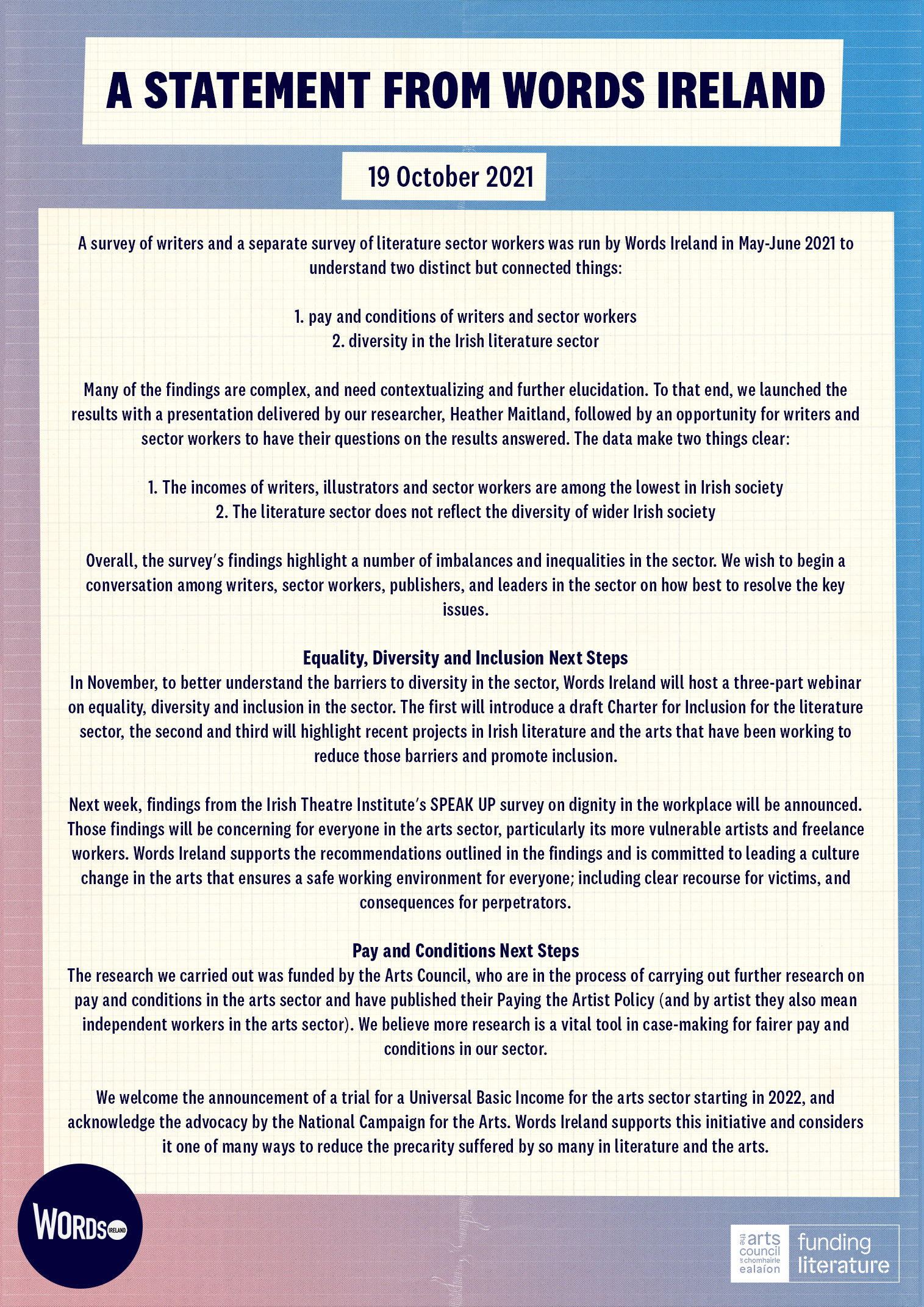 Low annual earnings from all sources

38% of writers and illustrators and 50% of sector workers said that low pay was a barrier to further developing their careers.

The average annual earnings of Emerging, Mid-career and Established writers and illustrators from all sources was €25,622. This is less than two-thirds of the national average annual earnings for all employees in Ireland in 2019, including regular, overtime and irregular earnings, of €40,283. It is also less than the average for the Arts, entertainment and recreation sector of €26.318. Only the Accommodation and food sector earned less. Half of writers and illustrators earn less than €19,993 but 9% earned more than €60,000.

The median gross income earned in 2019 by Emerging, Mid-career and Established writers and illustrators from their creative work in 2019 was €500. This means that half of them earned less than this. The median for Mid-career and Established writers and illustrators who might be expected to earn a substantial portion of their annual income from their creative work was €2,000.

“It takes an incredible amount of persistence to maintain this kind of career over a long period. Unless you’re in the top 1% (or smaller), trying to earn a full-time living is a big risk to take. Part of this comes from Ireland being a small market, as even bestsellers don’t make a lot of money.”

— Established writer/illustrator from an underrepresented group

Reliance on other sources of income

The median gross income earned by Emerging, Mid-career and Established writers and illustrators in 2019 from work related to their own writing or illustrating (e.g. events, teaching creative writing, residencies, journalism etc.) was €395. Mid-career and Established writers and illustrators earned a median of €1,000 from this type of work.

66% of respondents to the writers’ and illustrators’ survey from underrepresented groups and 72% of those not identifying as part of such groups said that their writing or illustrating was made possible by income from work not related to their writing or illustrating. The disparity is because migrants and lone parents of children under 12 are less likely to be able to undertake such work.

33% of respondents to the writers’ and illustrators’ survey from underrepresented groups and 24% of those not identifying as part of such groups said that their writing or illustrating was made possible by income from another member of their household, family or friends.

Just 15 sector workers (17%) received a Pandemic Unemployment Payment in 2020, one received a payment through the Part-time Job Incentive Scheme for the Self-Employed and six received Covid-related funding from the Arts Council.

This lack of job security means they are unable to plan for the future:

The level of competition for the few available entry level jobs means most workers are expected to work unpaid to enter the literature and publishing sector with 21% of respondents not identifying as part of underrepresented groups getting their first paid job following unpaid work. All those without alternative sources of income are therefore excluded from the sector with no-one from underrepresented groups got their first paid job this way.

Impact of the Covid-19 pandemic

The percentage of writers and illustrators saying that advances or royalties were among their top three sources of income fell from 50% in 2019 to 35% in 2020.

The percentage including speaking or engagement fees in their top three fell from 27% to 9% (the drop among those identifying as not part of underrepresented groups was even greater, from 34% to 6%).

The percentage including journal, magazine or publication fees fell from 22% to 6% and writing and illustration- related teaching fell from 24% to 12%.

25% of writers and illustrators stated unprompted that time pressures are a barrier to their career development. Time pressure appears to come from the need to earn income through work unrelated to their writing or illustrating and from family responsibilities. Lack of time disproportionately stops Aspiring and Emerging writers and illustrators from applying or competing for career development or support opportunities (39% compared to 10% of those identifying as not from underrepresented groups).

“To write a novel I would need time. I have tried. I’ve written two, but cannot find time to revise, to really work on them. Or to explore new ideas because I work three jobs to afford rent and food and care for a dependent”

Some of those from underrepresented groups are unable to work outside the home and this impacts on the data. 27% of Mid career and Established writers and illustrators from these groups spend at least three quarters of their working time on their creative work compared to 20% of those not identifying as part of underrepresented groups.

10% of writers and illustrators stated unprompted that they faced discriminatory attitudes within the literature and publishing sector including ageism, racism, sexism, bullying and sexual harassment and negative attitudes to diversity.

The five ways of tackling barriers to access in the literature and publishing sector most frequently suggested unprompted by writers and illustrators were:

Sector workers seemed particularly aware of the structural challenges caused by the current relatively small Irish market place. As a result, they suggested unprompted a wide variety of smaller scale actions with the following themes occurring most frequently:

The biggest barrier to access in the literature and publishing sector is low pay which also impacts negatively on the creative output and wellbeing of the majority of those already within it. Higher pay for sector workers and higher fees for writers and illustrators are only possible, however, if there are more jobs within the sector and more work is published. To achieve this, all its stakeholders must work together to build the Irish literature and publishing sector so that it can achieve its economic, social and cultural potential. 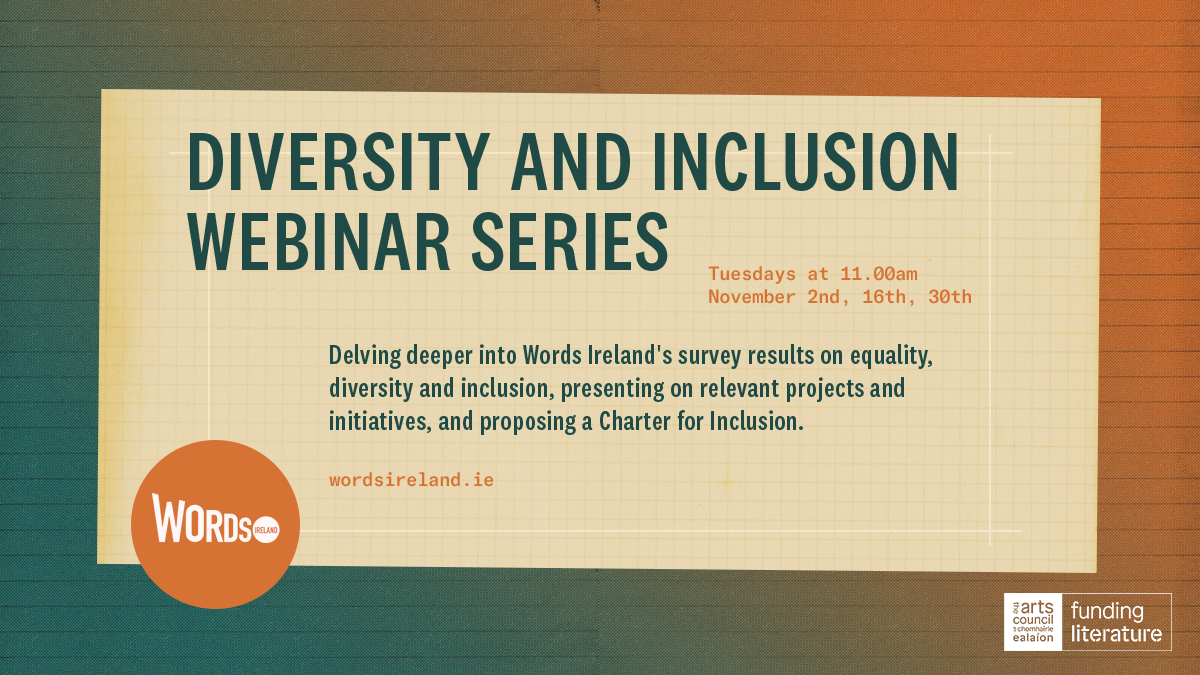 Throughout November 2021, Words Ireland is hosting a series of discussions and presentations on diversity in the Irish literature sector. We’ll delve deeper into some of the implications from our recent surveys, and look at some of the more interesting projects and programmes underway in Irish literature, and the Irish arts.

Webinars are not being recorded, and registration in advance is essential. Sign up here:

More details on speakers and featured projects will be available soon.

Words Ireland, a grouping seven literature organisations, is embarking on an equality, diversity and inclusion initiative in 2021 supported by the Arts Council. We began by carrying out the first major survey of writers and illustrators in Ireland in over a decade. The anonymous information gathered will feed efforts to improve the payment and working conditions of writers and literature workers for years to come. It will also identify barriers to being published or working in the literature sector that underrepresented groups may face.

The initiative also involves the development of a ‘Charter for Inclusion’ that will outline Words Ireland’s collective values, principles, and our commitments to underrepresented writers and illustrators, and to literature workers in Ireland. Once drafted, we’ll share it with the sector for discussion and comment at the first session of our webinar series starting autumn 2021. The series will also try to identify practical ideas and initiatives that can reduce barriers to access in future.  We’ll then work toward a final draft of the Charter that we’ll encourage the whole sector to endorse.

Throughout the process, our work has informed by six writers who understand the difficulties facing people who wish to enter and progress in literature. Each individual organization within Words Ireland has also been adopting or improving their own diversity strategies over the course of the year as part of the overall journey.

We acknowledge that practical ideas, discussions and public statements are only first steps. We’re beginning from a position where supports and initiatives aimed at underrepresented writers, illustrators and literature sector staff are almost non-existent, and where strategies and policies to address these barriers are at very early stages of development.

As any writer knows, becoming a writer takes years of hard work and dedication. Sustaining a life as a professional writer is difficult. However, we’re committed to finding ways that make a career as a writer, illustrator, or literature sector worker equally feasible for all.

*people who continue to experience barriers to engaging with and participating in the arts because of their socio-economic background, their ethnicity or religion, their sexual orientation or gender identity, their family status, their age, their membership of the Traveller Community, or through lack of accommodation of a disability.